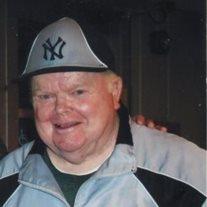 John F. Bruck, Sr., 73, of Clifton Avenue, Kingston, NY passed away Monday, September 1, 2014 at Ten Broeck Commons Nursing Home with his loving family by his side. Born in Kingston, April 1, 1941, he was a son of the late Peter J. and Rosella M. (Sweeney) Bruck. In addition to his parents, John was preceded in death by sons William J. and John F. Bruck, Jr. and brother Peter J .Bruck, Jr. John was retired from IBM. He was an avid Yankee and Giants fan who for many years coached Little League. He bowled in many leagues, loved swimming in cold water and was generous with charitable donations. John is survived by his wife, the former Clare Prosser with whom he would have celebrated 50 years of marriage on September 19, 2014; daughter, Heidi C. (Garth) Allred of Ulster Park; son Timothy J. (Susan) Bruck of Accord; daughter-in-law, Lisa M. Bruck of Kingston; sister, Margaret "Peggy" (William) Harder of Hurley; brother James J. (Rose) Bruck of Kingston; uncle, James (Eleanor) Sweeney of Kingston; Grandchildren, Beth Allred, Liam Allred, Timothy J. Bruck,Jr., Samantha Bruck and Taylor John Bruck, nieces, nephews and cousins. Friends and relatives will be received Friday 2-4 and 7-9 pm at the Henry J. Bruck Funeral Home, 261 Broadway, Kingston, NY. Funeral procession will form 9:15 am Saturday at the funeral home then proceed to St. Peter's Church where at 10:00 am a Mass of Christian Burial will be sung. Burial to follow in St. Peter's Parish Cemetery. In lieu of flowers the family suggests contributions to St. Peter's Sharing Fund or a Charity of your choice.
To plant a beautiful memorial tree in memory of John Bruck, please visit our Tree Store

Share Your Memory of
John
Upload Your Memory View All Memories
Be the first to upload a memory!
Share A Memory
Plant a Tree