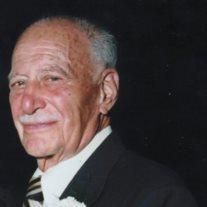 Edward V. Riggio, 94, of Ulster Park, NY passed away Sunday, August 17, 2014 at HealthAlliance Hospital Broadway Campus, Kingston, NY. He was born January 26, 1920 in New York City to the late Barney and Hilma (Werronnen) Riggio. Ed served his country in the US Navy during WW II. He was an accomplished tradesman who was highly skilled in various aspects of the construction industry. His skills were utilized in the construction of the Kingston/Rhinecliff Bridge. When not directly involved in his chosen profession he enjoyed life as an outdoorsman. He traveled extensively having made a number of trips by motor home to Alaska where he would fish and explore. Upon retirement, he and his wife Kilesta purchased a motor home which took them to all parts of the nation where they participated in motor home rallies. For many years he and his wife would spend the winter months in Florida.. But above all, Ed was a devoted husband and family man who loved his children and their families. When it came to helping members of the family there was no task too difficult or too time consuming. He was truly a man among men. Survivors include his wife, Rita (Melbert) Lukaszewski Riggio; sons, Edward B. (Ruth) Riggio of Woodstock and Michael (Diane) Riggio of Albany; a sister, Nelbar Trapani of LI, NY; step-children, Robert (Patricia) Lukaszewski, Donna Lyons, John (Deborah) Lukaszewski, Gerry (Anita) Lukaszewski, Teresa Mitchell and Alycia (Philip) Sofokles, 9 Grandchildren, 14 Great Grandchildren, nieces and nephews. Ed was preceded in death by his first wife, Kilesta Schafenberg Riggio, a daughter, Dorinda Wenzel and a granddaughter, Diane Guidry. Friends and relatives will be received Thursday 4 - 7 pm at the Henry J. Bruck Funeral Home, 261 Broadway, Kingston. There will be no funeral procession. A Mass of Christian Burial will be offered 12:00 noon Friday at the Immaculate Conception Church where Ed was a member. Private burial with Military Honors will be in Mt. Calvary Cemetery at a later date. In lieu of flowers the family suggests contributions to a charity of your choice.
To plant a beautiful memorial tree in memory of Edward Riggio, please visit our Tree Store

Share Your Memory of
Edward
Upload Your Memory View All Memories
Be the first to upload a memory!
Share A Memory
Plant a Tree